A HEARSE CONVOY THROUGH GERMANY

Here it is, finally, the story of how Stephan and myself picked up our hearses in Bremen (north Germany) to drive them home to Munich and Vienna (Austria) respectively). This was a trip of 750 kilometers, even more for Stephan! He got himself a 1969 M-M combination, and I was there to pick up my 1978 M-M rearloader Hope.

I was coming back from a business trip in Canada, and flew directly to Hamburg which is close to Bremen. Stephan and two of his friends (Rainer and his girlfriend Sandra) drove all the way up to Hamburg from their Vienna home, with a Volvo "service car" station car, crammed with tools. Which, it turned out, was very very valuable!

We met at the hotel in Hamburg where we were staying. Imagine our suprise when we saw this Mercedes-Benz hearse parked just next to our hotel; there we were to pick up two hearses and we find another one parked just across the street. How strange can it get?

We went to Bremen, where I picked up my 5-day number plate and then we went to pick up the cars. All seemed more or less fine, the cars started up pretty quickly, albeit Stephans was sounding a bit rough. On our way to the first gas station I managed to run dry, in the middle of an intersection! How embarassing can it be, standing there, blocking the traffic, with a hearse run out of gas? It turned out the shipping company had siphoned my gas tank a bit too thoroughly! Anyway, the TV camera guy was sent off to get some gas, and luckily for me, that was the problem; the car started again and off we went. *phew*

Stephan went to a local technical inspection station to get an export registration plate, but apparently they were just stubborn, narrowminded or whatever; it seemed they wanted paperwork equal the cars weight before they even looked at the car, so he continued with his California plates. Then we went to the Autobahn, cruising south.

Small stops here and there, to fill up the gas, check oil and all stuff, but we were on our way! Just imagine the looks of two Cadillac hearses on a German Autobahn! Amazingly enough the TV crew managed to miss the beauty of this appearance completely!

We finally stopped for a quick lunch at one of the service stations, where I did my short TV interview, and then we got rid of the TV crew (of two). I must say, it was NOT worth the effort of having them around (more about that later), but you never know in advance.

At all these service stops, people were just looking at the cars, some even pointing fingers, but all the comments I got were pretty positive. A guy even asked whether he could take some pictures of our cars!

On the further cruise we had all sorts of weather, from sunshine to heavy rain, a good time to check out the wipers and the heating! The radio in my hearse worked, but apparently is not well suited for our congested airwaves; it was either receiving all stations at once, or none, still, it produced some noise. The engine ran very smooth all the time; cruising at 60 to 70 mph you couldn't really hear it!

Then suddenly there was a bang, followed by a loud rattle and I thought that something broke in the engine or drive train. The car swerved, but I caught it and came to a stop on the emergency lane. It turned out the left rear tire had delaminated, but not more damage occured. Luckily Rainer and his girlfriend Sandra in their "service car" were right behind me; they had all the tools with them, I had a spare wheel (a brand new Firestone on it) and Rainer even changed the wheel for me! Now thats what I call a gentleman :-)

We had another stop later when Stephans carb needed a bit of fixing; of course during this stop it started raining again. The real car buffs (Rainer and Stephan) stayed out and worked under the hood while I admit I fled to the inside of my car to stay dry! It was also there where two highway cops checked our papers. No Madam, you're not supposed to keep US plates on your car while driving with German ones. Anyway, they were more interested in the cars, shipping and the related time and cost than actually in the papers.

Later on Stephans car developed some weird rattling noise, possibly an engine mount, but smooth driver he is he managed to keep going and then the convoi went on further south, taking it easy but steady with no more problems on the way. Usually I was just following Stephans hearse and I must say it was looking really really impressive! Forget about all those Mercedes, BMW, Audi; if there is a Cadillac hearse right next to either of them you'll know which car is better looking!

At Wuerzburg service station we met Wolfgang Grebenhof for some car talk, and some urgently needed coffee. It was getting dark at that time (9 pm), so eventually we took off for the last part of our stint, mine being significantly shorter than Stephans. Driving through the night is just an awesome feeling; at least now I know that the cornering lights are working (cool), and that the third indicator light (high beam?) on the fender is not working (not so cool). Cruising through the night I eventually had to part from my friends (sigh) and headed to Munich. I eventually arrived home at 2am; finding a parking place at my house wasn't too easy! I called Stephan (we were keeping in contact via our cellular phones), he was near Passau at the time, had a few hours left to drive; poor guy. 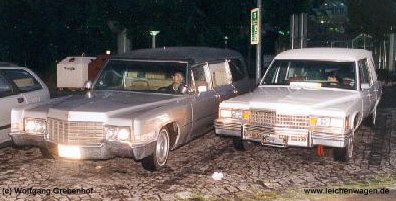 When I was running my video tape of the TV broadcast, I was in for a big disappointment. This TV crew spent a few hours with us, they had the unique opportunity to see TWO Cadillac hearses on the road in Germany, there were great moments on the road, at the service stations (us two pulling up to refuel, with hoods open), and they just missed it completely. I think they just showed 30 seconds of interview and 10 seconds of actual car coverage, only a short glimpse of my hearse Hope, none of us two cars together. Well, tough luck. At least we have experienced it!

My thanks and greetings go to Stephan, Rainer and Sandra, who proved not only to be very helpful but incredible nice company and friends as well! Without them I certainly wouldn't have done the trip so easily and definitely not with that much fun! It was really a pity to part with them at the Nuernberg highway intersection. Meeting Wolfgang, a fellow Cadillac owner was a treat as well! I certainly hope to see them all again, possibly at the Cadillac meet in July. Unfortunately since Stephan and myself live pretty far apart, our two hearses will not meet so soon, but the day will come again!

All pictures here are provided by Rainer and Wolfgang, thanks a lot!

Back to top of page

Back to main stories page