Here are the pictures of hearses by the British make Austin. This company is now defunct, but was one of the larger car manufacturers in the UK, until it was eventually bought by Rover, and then disappeared.

This is an Austin Princess from 1964. The coach builder is Woodall Nicholson. Those pictures actually show the car before she was cleaned and polished! Meanwhile she's on the road again, apparently in Sweden. In 1964 the Austins were still original, unique cars, looking very British! Meanwhile those cars are pretty rare, the rust is still hungry in the British Isles!

It is also worth to note, that those Austin Princess from 1964, especially in their VandenPlas guise, were actually luxury cars, on par with Jaguar and Daimler! If you compare it with what Austin built in their last years of their existence, this company went way downhill!

This is an Austin Princess from 1976. Most of these cars have already been banger raced (the British equivalent to the US demolition derby). Strangely enough, although those cars were pretty comfortable and roomy, they were never much liked, and that is one of the reasons why those cars are not amongst the collectibles of this world. This model was also called "Wedge", can you figure out why?

The later Austin hearses did not have the same reputation of Daimler or even Rolls-Royce hearses; due to their competitive cost they have been popular with smaller funeral homes, though. This wegde model was the last hearse built on an Austin chassis. 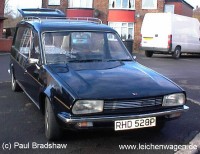 The British (and Irish) hearese feature huge windows without curtains and a roof rack. The latter is used to hold wreaths and flowers in place that are put there for a funeral procession. The casket is put on the so-called "deck" for all to see. 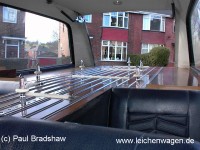 Many British hearses have additional bearer seats, for, guess, the pall bearers. In contrast to American and most European hearses, a divider between driver and casket compartment is mostly unknown, so the bearers have the pleasure of having a coffin between them! 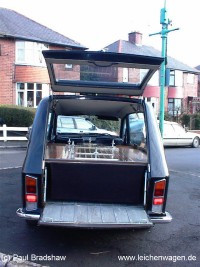 Another unique feature of most UK hearses is that they have two decks, an upper and a lower one. When transporting a casket, it is put into the lower deck so that the hearse looks empty. Otherwise the lower deck can store tools like a collapsible cart for the cemetary, or also useful goodies like jumper cables!