My friend Predseda from Prague in the Czech Republic has sent me tons of excellent informations and rare pictures from Skoda hearses that you do not see anywhere else! So my thanks go East and we proudly present you the world of the Czech Skoda hearses: 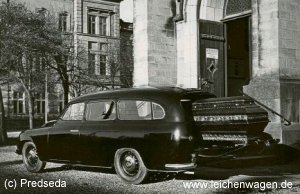 This one is the Skoda 1200 (not 1201) hearse. It was designed by famous "Carosserie Sodomka", czechoslovak creator of a large numbers of wonderful special car and coach bodies, like convertibles, ambulance cars, hearses, limousines etc. on standard car chassis. A little technical info: whole car is the same as 1200 ambulance (designed by Sodomka, too), only differences are: black color, interior and one special slow gear in gearbox, suitable for moving in the front of funeral procession. There are many photos of Skoda 1200 ambulances, but only one of a Skoda 1200 hearse that Predseda knows about. 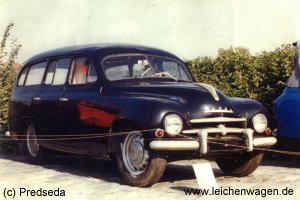 The second picture here is a Skoda 1201 hearse. It is the only car from the Skoda 1200-1201 hearses range, that survived until today. Differences between Skoda 1200 and 1201 are very small, the main difference is a little bit stronger engine (36 HP for Skoda 1200, 47 HP for Skoda 1201), other minor changes are in the car acessories (for example different door handles).

The Skoda 1200 was produced between 1952 and 1956, Skoda 1201 between 1955 and 1961. In the years 1955 and 1956, both types were produced simultaneously. More than 67 thousands of all the Skoda 1200 and 1201 variants was made, but ONLY 50 hearses! All of them for Czechoslovakia“s inner market. Unbelievable, because Czechoslovakia had in those years more than 10 millions of inhabitants.
In the late 50ies, after the socialistic revolution, "Sodomka" was overtaken by state and communists forced it to produce buses only (known as Karosa). It was the end of beautiful czechoslovak hearses, all the hearses in future will be only modified standard station-wagons, vans or trucks. 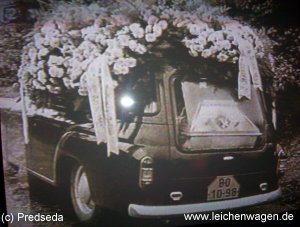 This picture is a Skoda 1202 from the late 60ies. It is a standard STW (station) with hermetic barrier between driver and casket area. Main difference from STW is a rear door with large plexi window. The window is a little profiled out to better fit the coffin inside. This vehicle was produced right in Skoda factory. 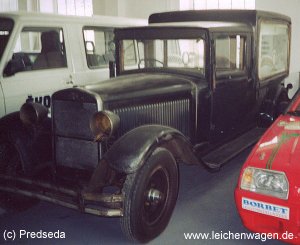 This photo shows an example of an early Skoda funeral car. It is placed in Skoda-museum depository and waiting for its reconstruction. I don“t know a type of this car (maybe it is not Skoda, but its predecessor - Laurin & Klement).

Back to the picture page