Here are the pictures of Opel hearses. Opel is the German branch of General Motors; in Britain the cars are called Vauxhall. As Opel, Vauxhall originally was an own, independent company, that was eventually bought by General Motors. For a long time, both Opel and Vauxhall produced their own range of individual cars although being owned by the same company.

This car would nearly have been my very first hearse! For a few reasons it did not happen: I was moving at the time and had other problems than buying a car.

It was not only my removal; the engine wasn't working, and although it shouldn't have been a problem to fix; what should I do with a car in Ansbach when living in Munich, without a trailer and tow car?

The rear doors are quite interesting: Only the lower part is actually opening. Behind those doors is some storage area for tires or tools.

This car had very few owners; upon looking closely you can spot the name of the funeral home originally owning it!

An Opel Rekord as hearse:

Hard to believe, but this car is really a hearse (how did they fit the casket into that car?). The type of the car reads: "Opel Rekord D". Thanks to Pit for the information.

I got those picture from the owner. Unfortunately he had to sell the car rather quickly, and his web page has since disappeared!

This is an Opel Rekord, E1 model from 1980. The coach builder is Rappold. Ingo has provided the interesting picture, that shows the doors behind the drivers doors, that are original from the bas car, but only reaching up to the window line. Usually you will find some room for storage (spare tire, tools) behind these doors.

A Rekord C in a really poor state: 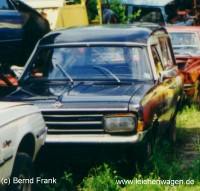 Now you gotta be strong. Bernd writes: "This is a C-model Opel Rekord hearse, which we found on a recyclers lot in 1990. The car was in a catastrohic shape, the lower parts were only existing for the optics, the headlights nearly fell out all on their own and so on. For me that was just too much work, especially since back then, I never had used a welding torch before! So I put the car into the local recyclers magazine, and indeed somebody showed up and took care of the car. Whether he restored it or not, I don't know, though."

This is the Opel Admiral owned by Seven at the hearse meet in 1999 (the dark red car on the left side of the picture).