Here they are, the pictures of Cadillac hearses, amongst it my own hearse, named Hope! 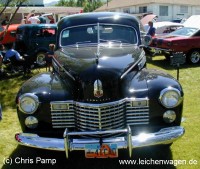 This is a Cadillac from 1941, found by Chris Pamp at a car meet. Cars of that vintage have become quite rare today, the more exceptional is the pretty good shape this car is in.

This car represents the so-called "limousine style", with windows all around. mit Fenstern rundherum. It is also a bit unusual to our "modern" eyes that the cars doesn't have any landau bars. 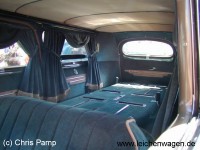 A look into the inside reveals the beautiful interior of that car. Just look at those curtains! You can also see the deck with the rollers for the casket.

A Cadillac of the fifites:

This car was photographed by Martin Tomczak. Everyone wondering what suicide doors are, here are some!

This car is sure a very strange sight, and you can be sure there aren't too many of this kind around. While it may look pretty standard at first glance, you'll be in for a nice surprise once you look closer.

Stefan Flincker writes about those pictures: "Originally, this car apparently was a 1961 Caddy. As far as I know the coach builder seems to have used parts from two other cars. I've seen the car offered for sale in a magazine a few months ago." The front of the car ios a very strange mixture between a 50ies Cadillac, dual headlights of a 1961 and lots of chrome.

This coach was based on a standard limousine, apparent by the way the rear compartment is put on the car; it also has the standard windscreen and not the commercial glass the commercial chassis come with. The rest of the car is just a puzzle and I don't know which part comes from where; the tail lights are from a 1961 model, that's for sure.

Rico found this car at the famous car meet in Vasteras, Schweden gefunden. I wasn't sure whether it is a 1965 or 1965, but Stephan helped me out and identified it as a 1966, because of the smaller side markers in the front fenders. When looking closely, you can also spot the Miller-Meteor logo on the rear fender.

Johns 1968er Combination Coach. You can see that there are windows all around the car; the beacon on the roof can only be found on ambulances and combinations, not on pure hearses.

Combination Coaches also have curtains, since they are also used as funeral vehicles. This coach was built by S&S.

Looking closely you can spot the stretcher (or how it is called).

These are John's both Cadillacs next to each other. In the front there is the 1968 S&S, in the background the white car is the 1970 Miller-Meteor.

Here is the 1970 Miller-Meteor combination in full size with the landau panels. It is dressed as a hearse so to say.

The same car without the landau panels.

Another great shot of the rear compartment, seen from the tailgate towards the driver seat. One of the seats is folded up. What you can also see (or better: cannot see) is, that the combination coach do not have the decorative lighting of the hearses, simply because they have windows where the hearses have a solid wall.

The rear compartment, seen from front towards the rear.

Seven found this great car at a hearse meeting in 1998. Luckily for us, he also made pictures!

The 1967 and 1968 Cadillacs look similar; as usual small differences help to identify the exact model year. The 1968 model has a slightly longer hood hiding the wipers.
Quite a few people are interested in this hearse, which is a pretty unusal sight on German roads!

Unfortunately, the landau bars are missing on that car, which is a pity since they are a major styling element on hearses. Still, the pure size of the car is impressive, especially for European eyes!

This is the ex-car of Stephan. It is a Miller-Meteor Combination from 1969. This picture shows the car with the landau panels, in her funeral dress, so to say.

This picture shows her without the landau panels, in ambulance mode. The picture also shows the size of the car which is impressive. Still, the coach builders managed to keep the proportions and the elegance of the base car and the resulting coach doesn't look like it is enlarged at all. 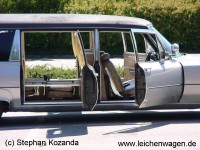 The car is called Stephans ex-hearse, because he has sold her. Interesting, enough, she is no longer located in Austria, but in Germany, and also pretty close to my home. Hopefully, this will allows us to stage a meeting with her and my Hope again, similar to the hearse concoi we had when driving the cars home from the shipping port in Bremen in spring 2000!
This picture also shows the doors behind the drivers seat; they open extremely wide and allow access to the folding seats in the rear. 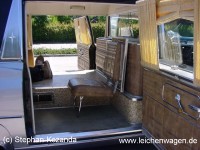 A detail shot of the folding seats. In case of ambulance service a nurse or someone can sit close to the patient. The boxy compartment directly after the drivers seat contains storage space for ambulance stuff, sometimes the spare wheel is put there if the compartment below the deck is not available to put the spare there. 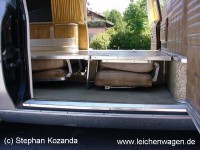 The folding seat folded down (hence the name :-). The back of the seat then becomes part of the casket deck. 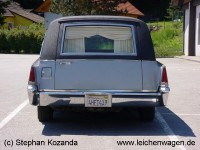 A rear view of the car, She is pretty wide which allows to put the gas tank filler next to the rear door. The newer hearses (for example my Hope from 1978) are usually not that wide and the filler is then placed on the side of the car.

Stephan with two of his Cadillacs; the car on the right is a DeVille Convertible (Cabrio for us European folks) from 1969. It becomes obvious that the front part of the cars are the same for the "normal" cars and the professional cars like hearses and ambulances. This shot also shows very nicely that the professional cars come with a significantly larger (higher) windshield, called "commercial glass". Therefore the hearses have much more headroom than standard cars, a welcome treat for lady drivers (like me) who like to put up their hair!

Another combination coach, this is a 1970 Miller-Meteor. This car was later modified to a pure ambulance; you can see the additional lights and the beacon and siren on the roof. While very few ambulances do have a beacon, the other lights can only be found on ambulances.

A 1970 Miller-Meteor hearse from Robert Jackson

A hearse in its natural environment: A cemetary. This is a Miller-Meteor with removable landau panels. 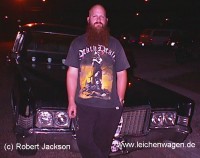 This is Mr Robert Jackson from Baton Rouge himself, proudly presenting him in front of his beloved beauty.

This is a 1974 Cadillac hearse owned by Alex "can't sleep" Lohmann in a slightly unusual color.

My good friend Alex from Texas is not only gifted with owning hearses, he can also play music and knows a thing or two about cars as well. Since he had to paint this car anyway (he is one of those enviable guys who cannot only do that but also have the tools and facilities for it!) he chose a slightly unusual, happy color for the car.

Interestingly enough, this color brought him more attention to the highway patrol than he preferred, so the car had to change its color and is now painted in a color more often found at hearses. Strangely enough, it seems he didn't get the same amount of attention by the peace keeping force since then. 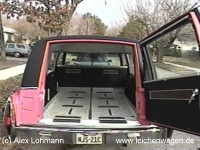 The rear compartment of the car with the casket rollers. 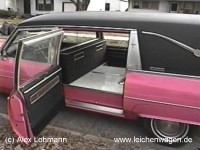 The rear door of the american hearses often allows access to a compartment beneath the floor of the rear compartment. Usually the spare tire, some tools, or a casket roller table is stored there. 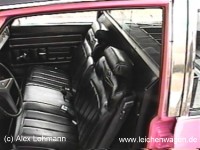 The driver compartment of the car. Usually those cars are equipped identically to the base car, with the same dash board etc. Often, there are no specific extras, so you will find only the standard equipment, like air condition, power steering and radio. Well, what do you need a cruise control on a hearse?

This is my hearse. It is a 1978 Cadillac Miller-Meteor; I called her Hope. The name simply expresses my hope, that my (long) search for an american funeral car would result in finding one!

Hope isn't exactly a compact car: With a length of more than 20 feet and weighing around 3 metric tons she is about twice as long and three times as heavy as my present winter vehicle!

This view shows the typical and impressive Cadillac tail end.

The inside. You can see the rollers on which the casket will be slid in and out of the car. This sort of inside decoration is usually not found in German hearses. This view also shows the giant size of the car.